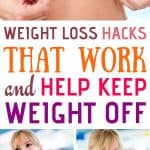 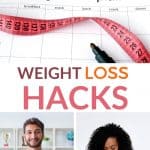 Need to lose weight but don’t want to do some crazy detox diet? Try these weight loss hacks that work for life.

The number of commercial diets is staggering. Without doubt, many diets can help you lose weight as you might have seen with keto diet weight loss success.

But the are two main reasons why most diets fail. One is that they’re usually too hard to follow. For example, consider the popular Master Cleanse diet. It’s a mix of pure water, maple syrup, lemon and cayenne pepper. While on the Master Cleanse, that’s all you can have for several days. Some people follow it for up to 21 days.

And what do you think happens when you’re done drinking nothing but lemonade? That’s right, you end up bingeing and putting more weight on that you lost.

The second reason many diets fail is because they don’t teach you how to keep the weight off for the long haul.

Although intermittent fasting (I.F.) has been practiced since prehistoric times, as a popular diet plan, it’s only been around for about a handful of years.

An ever-increasing number of people are having great success with this time-restricted method of eating.

I.F. doesn’t so much tell you what you can’t or cannot eat.

Rather, it limits you to when you can eat. And the idea behind it is that by going enough time without eating, your body will run out of glucose (carbs) to burn for energy.

Consequently, your body will use your stored energy reserves (fat) to fuel your brain and body.

So how long do you have to go without eating? The most popular method of I.F. is doing a 16/8 split.

What this means is that you fast for 16 hours a day and eat only during an eight-hour window.

But isn’t breakfast the most important meal? Doesn’t fasting until noon or even later break that golden rule of nutrition?

Well, the good news is you can still have your eggs and eat them, too.

But say your last meal isn’t finished until 9 p.m. If you break your fast with anything that has calories at 8 a.m., you’re not tapping into your fat reserves for fuel.

More accurately, you’re not burning ketone bodies for energy. Thus, one of the easiest weight loss hacks is by restricting your eating window to eight hours.

You can ease into I.F. by fasting for 12 hours one week. Increase the fasting time to 14 hours during the second week. Then, starting week 3, try 16 hours.

There are several studies like this one demonstrating drinking water a half hour before meals can help reduce the amount of calories eaten.

It sounds so simple. However, relatively few people try this easiest of weight loss hacks.

And the reason why is pretty straightforward….

Many people are very busy and forget to drink water. Furthermore, oftentimes, we power through work before realizing that we’re hungry. Thus, we gorge before we even think about drinking water.

Another benefit of drinking water is it aids in elimination. If your intestines are too dry, it can lead to constipation.

Break Your Fast With Veggie Juice

In addition to intermittent fasting, and drinking water, drinking a green drink is one of the best weight loss hacks.

Before you break your fast, drink a couple glasses of water. Then, half an hour later, before you actually eat a meal, drink one to two cups of veggie juice.

The best veggie juice to drink is a blend of green leafy vegetables you can make at home.

Using a Vitamix or other high-quality food blender, add a handful or two of kale or spinach. Add a couple more leafy veggies you like.

You can sweeten the drink by adding a low calorie or zero-carb sweetener such as stevia.

Want a good strategy for making sure you always have enough healthy veggie juice for the week? Prepare the drinks ahead of time. You can freeze the juices in a mason jar. To unfreeze, simply run under hot water for a couple minutes.

So why are green drinks one of the best weight loss hacks? Blended green leafy veggies contain fiber.

Fiber is said to help your body get rid of waste. Moreover, fiber helps keep you full.

After drinking some green leafy veggies, you’ll probably not be in the mood to eat a big serving of high-starch carbs such as pancakes.

Another benefit of drinking veggies for your first meal of the day: it helps stabilize your blood sugar.

In order to avoid the pitfalls of eating lots of meals out, you have to learn how to meal prep. When you eat out, you’re more likely to overeat.

But when you eat at home, you’re more in control of the ingredients.

Speaking of being in control, another of the weight loss hacks that work is using meal prep containers at home.

Meal prep containers measure the amount of macros in a meal. There are three macros (macronutrients): carbs, fats and protein.

Of the three macros, it’s critical to keep track of the amount of carbs you’re eating. And don’t be afraid of eating fats.

In fact, higher fat low carb recipes just might be the best type of diet to help you melt extra body fat.

You should also get in the habit of motivating yourself to wake up early as it’s the best time to squeeze in a morning workout routine.

The best selling dietary supplement is turmeric, which is a spice used in Indian cooking. One of the compounds in turmeric is curcumin.

There are thousands of studies on curcumin.

People with obesity do not have sufficient beneficial gut bacteria. This makes it very difficult for those with obesity to lose weight.

Adding turmeric and apple cider vinegar to your veggie drinks can also be one of the best weight loss hacks you can try.

What’s another easy thing you do to help you lose weight? Leave a comment.

By Lisa MarcAurele on September 6th, 2018